You are here: ALL RECIPES / HEARTY HAM AND BEAN SOUP RECIPE 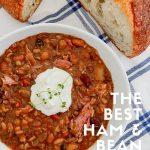 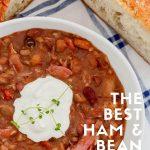 I’ve been making this simple and so delicious ham and bean soup recipe for decades! It’s so hearty and makes a perfect meal any time of the year! Cook it on the stove or in a slow cooker. This is a must-make recipe!

We really enjoy this healthy-ish soup and because I keep the simple ingredients in my pantry and freezer I can make it anytime!

Ham and Bean soup’s roots reach far back in history! It’s what I call “peasant food”. This soup was a meal made from few ingredients that fed a large family. And not only was it filling but nutritional! A homerun easy dinner!

There are so many versions of this yummy soup-meal. Many are regional spins on this simple dish.

My recipe is the Amish version! And I add one extra thing to give this substantial soup extra flavor. Think of it as my “flavor bomb”!

Although I did not live in Lancaster County all my life, I have adopted many of their farm to table recipes. Living in a very agrarian community means eating lots of farm fresh foods!

One thing I love about this recipe are the 15 different beans that make up this soup. They marry together while they simmer for perfect bean-y flavor!

I count 17 beans, but I think large lima and baby lima are the same bean but different varieties. Not sure about the other additional beans!

Regardless, they soup is called 15 bean soup.

You can see the beans I use HERE.

You can probably find a great bean mix for soup in your local grocers.

MAKING SURE THE BEANS ARE SOFT

We all love bean soup that has soft, squishy beans! They impart their delicious starchy flavors into the soup! YUM!

There are two things you can do to make sure the beans in your soup end up soft when you take that first hearty bite of soup.

One way is to soak the bean the bean for a few hours or overnight. Put the bean in a pot and cover the bean plus 4 inches of water. Discard any “floaters”. Also, discard the water before putting the beans into the recipe.

The beans will absorb the water and get soft.

Another way to soften beans, and my favorite, is to boil the beans in water for about 1 hour on the stove. Again cover them with lots of water. Discard the water before putting them in the recipe.

CAN I MAKE IT IN MY SLOW COOKER

This soup is delicious when made in a slow cooker. A long simmer time makes the beans soft and the ham has time to infuse its flavors into the broth.

Soften the beans and then dump all the ingredients into the slow cooker except the lemon juice. Cook on low for 8 hours.

OTHER MEATS TO USE

Ham hocks are the quintessential ham and bean soup meat.

Ham hocks are the joints that attach a pig’s foot to its leg. They are smoked and when the hocks cook for a long time in liquid its meat becomes soft super delicious!

They are widely available in grocery stores and butcher shops so if you can find them use them in this soup! You will be happy you did!

This scrumptious soup can stand alone as a meal but I love to top it with something delicious to make it even more tasty and complex in flavor!

My go-to topping is sour cream. I love the cool, tanginess it gives this deeply flavored soup.

Other toppings for ham and bean soup…

WHAT TO SERVE ALONGSIDE HAM AND BEAN SOUP

We eat this soup as a meal and often eat it without any sides. However to round out the soup here are some delicious suggestions that will pair wonderfully with this soup…

This is a soup that gets better after a day or two. Because I make a double batch I cool it and divide it up in freezer bags and freeze it flat. Then when the soup is completely hard I stand them up on end like books and keep them in my freezer.

Most soups, like ham and bean soup can keep in the freezer up to six months.

This soup can be kept in the refrigerator 3-4 days. 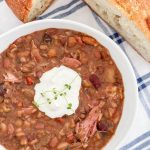 A delicious bean soup with rich, ham flavor that eats like a meal

It’s great to have all the ingredients on hand in your pantry and freezer to make ham and bean soup when you need an easy and soooo good meal!