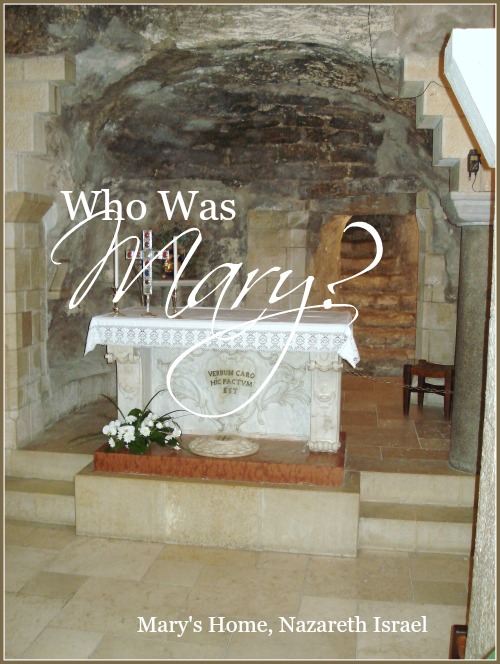 If you lived in Israel in the first century before Jesus was born you probably would have known many girls named Mary! Mary was a very common name during that time. However, there was one Mary that had such an extraordinary experience in history that she has been forever set apart from all her counterparts. It’s this Mary we will get to know a little better!

Today, I want to separate fact from tradition and tell you what we know from the bible and from the custom of the day.

Mary was born in Nazareth, a hill town in the area of lower Galilee in Israel. The town sits on the side of the ridge of Lebanon overlooking the Kidron Valley miles away.  In Hebrew Nazareth means “branch” carrying with it the idea of  “shoot” or “sprout”. It alludes to the prophesy about Jesus being the “branch or shoot” of David in Isaiah 11:1. 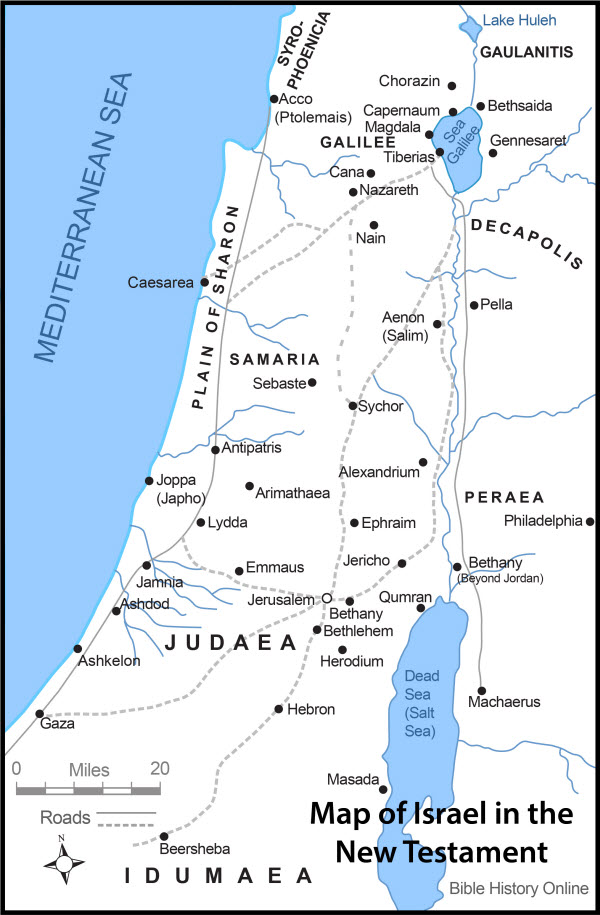 To find Nazareth, locate the sea of Galilee (lo0k for blue) and go slightly west and south.

Today, Nazareth is the largest city in the northern district of Israel. But, during Mary’s time it’s was populated by about forty families! 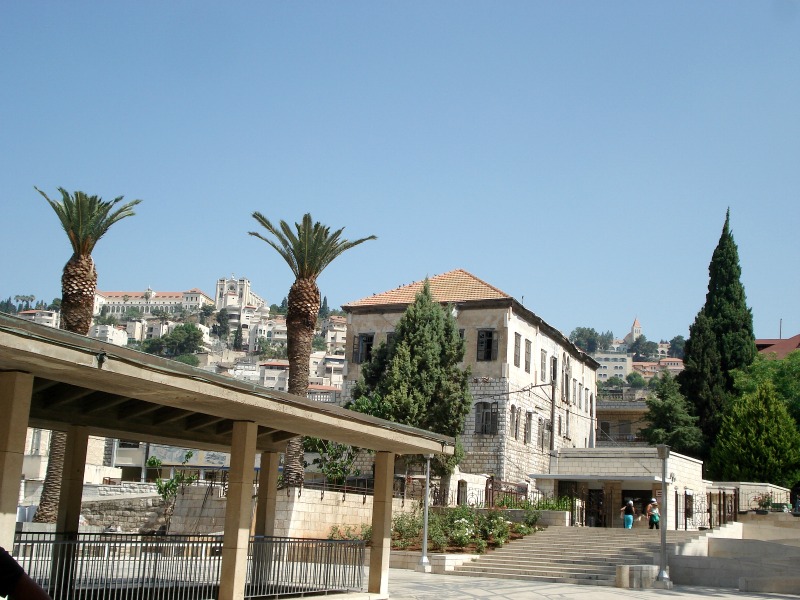 Mary’s hometown was more or less a pioneer town. It was resettled after the return of the Jews from their captivity by Babylon. It was also a Roman outpost. This made Nazareth a pretty undesirable place to live!

Nothing is know of Mary’s days as a child, however if she was like girls of her time she would have been a helper to her mother. She probably did not have any formal schooling save that of what her family gave her. One thing we know for sure from scripture, she certainly knew the world of God. This is evident in her in her reaction to the angel Gabriel’s announcement that she was to bare God’s son.

Mary’s knowledge of the Torah (first 5 books of the Bible) and the Prophets was probably the combination of being from a religious Jewish home and from her brother’s teachings. It was a custom of the time for boys, from the age of three, to go to Synagogue (a place of Jewish religious learning) and then teach their sister’s at home. 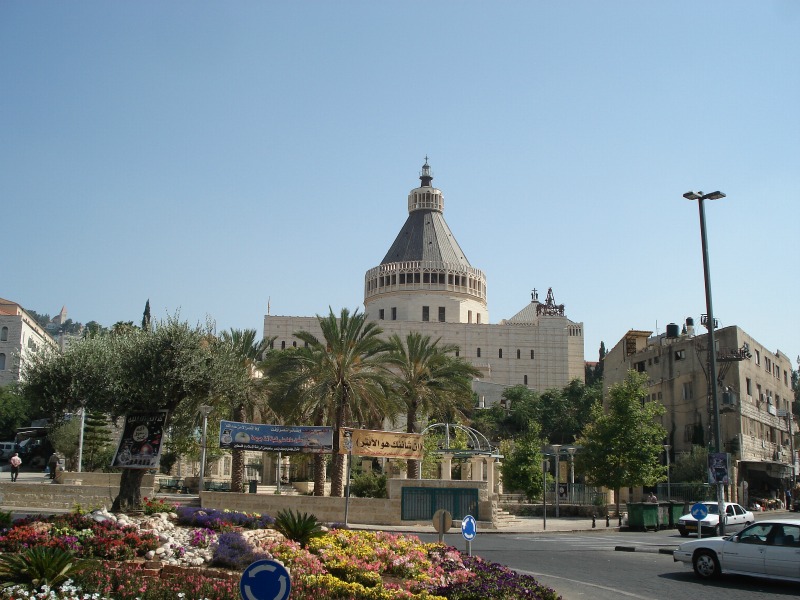 Church of the Annunciation, Nazareth Israel

Mary’s family was from the line of David, the great King of Israel. All Jews in good standing during that time knew their lineage. She was from the tribe of Judah, David’s tribe. The kingly tribe and lineage. The Messiah, the long awaited Savior, had to come from this line. It had been prophesied over and over.

During Mary’s time Israel was occupied by the Roman Empire. Rome had an interesting way of dealing with captured nations. It was called Pax Romana which means Roman Peace. They ultimately ruled captured countries but let the indigenous people rule themselves within strict parameters. In other words Rome ruled through the people living in an area. As long as the people followed Roman law and were at peace the people could follow their own customs and religion.

In Mary’s day all of Israel was waiting for the Messiah promised by the Prophets. They, however were waiting for a King to come to put an end to Roman rule. This great King would save and establish Israel once more. And I can imagine that every girl was hoping to be the mother of the coming Messiah! However, God had a Messiah coming that was even more than they could ever imagine. He was sent to not only save Israel, but save the whole world! 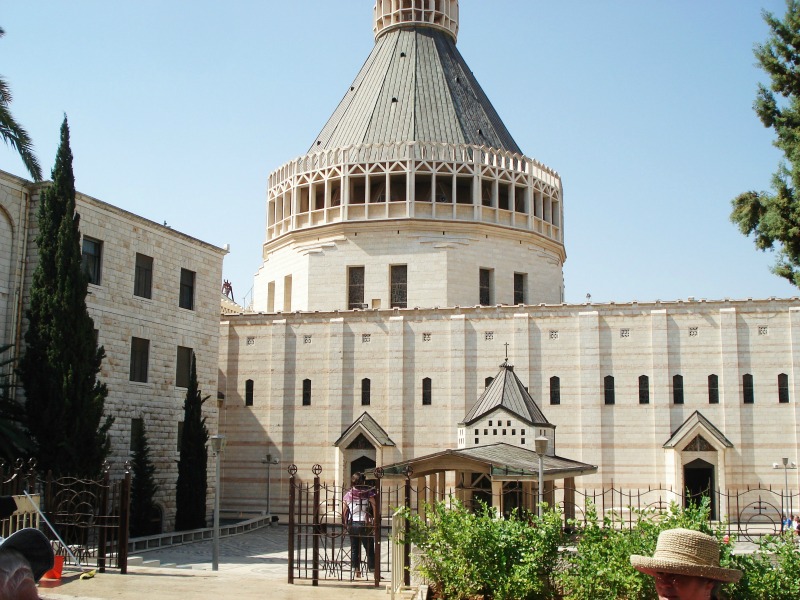 Closer view of the Church of the Annunciation, Nazareth Israel

Mary was betrothed to a carpenter named Joseph.

For some reason tradition has portrayed the profession of carpentry as a lowly occupation. Nothing could be further from the truth. Carpenter’s were highly esteemed and were like the engineers of today. They not only worked with wood, but were masons and built buildings. They had an advanced skill level and had to be smart to do their job.

Marriage was a two step process in the time of Mary. Betrothal was a contract of sorts that was characterized by a witness and the paying of a dowery. At the time of betrothal a woman belonged to her husband, however they did not live together or consummate  their marriage. The actual marriage ceremony took place about a year later. It was during the betrothal time that the angel Gabriel visited Mary. 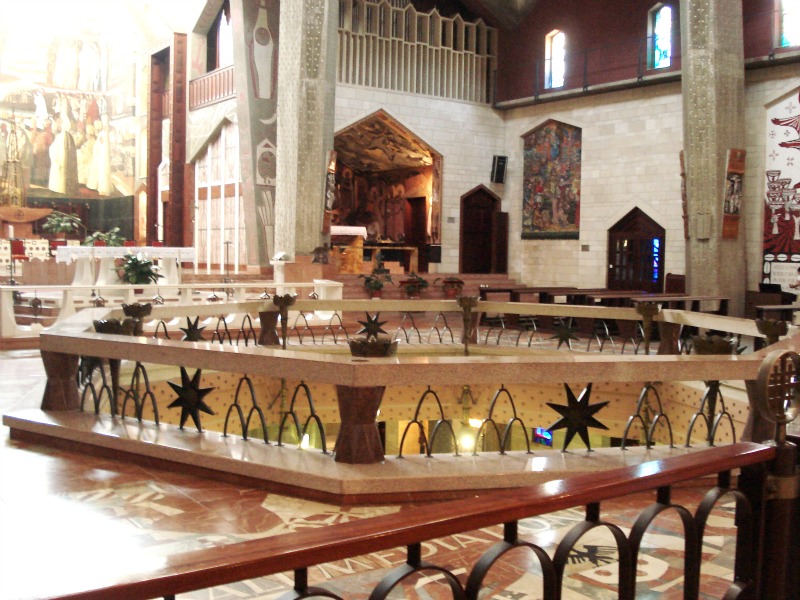 Inside the Church of the Annunciation (this is just a small portion… this church is HUGE).

The book of Luke tells us of this visitation.

Now in the sixth month the angel Gabriel was sent from God to a city in Galilee called Nazareth,  to a virgin engaged to a man whose name was Joseph, of the descendants of David; and the virgin’s name was Mary. 28 And coming in, he said to her, “Greetings, favored one! The Lord is with you.” 29 But she was very perplexed at this statement, and kept pondering what kind of salutation this was. 30 The angel said to her, “Do not be afraid, Mary; for you have found favor with God. 31 And behold, you will conceive in your womb and bear a son, and you shall name Him Jesus. 32 He will be great and will be called the Son of the Most High; and the Lord God will give Him the throne of His father David; 33 and He will reign over the house of Jacob forever, and His kingdom will have no end.” 34 Mary said to the angel, “How can this be, since I am a virgin?”35 The angel answered and said to her, “The Holy Spirit will come upon you, and the power of the Most High will overshadow you; and for that reason the holy Child shall be called the Son of God. 36 And behold, even your relative Elizabeth has also conceived a son in her old age; and she who was called barren is now in her sixth month. 37 For38 And Mary said, “Behold, the bondslave of the Lord; may it be done to me according to your word.” And the angel departed from her. Luke 1:27-38

Here is what we can learn about Mary from this passage. She was a virgin. She had never had a sexual relation. And she had a woking understanding of what the angel Gabriel was saying! She out of all the women in history would bare God’s son.

We can also see that she was “favored” by God. Not because she had done something special, but because God was going to use her in His great plan to save the world!

We can also see that she believed Gabriel and was obedient to God. “Behold, the bondslave of the Lord; may it be done to me according to your word.” Luke 1:37

A bondslave was someone who willingly choses to attach themselves to another and agreed to do their bidding for life. On the surface carrying and having the Son of God seems like the most magnificent honor. But we need to dig down into the culture of the time and look deeply at what Mary had agreed to.

The law of that time was very specific about what would happen to a women who found herself pregnant before living with her husband. She could be divorced (even a betrothed man needed to divorce the woman he was betrothed to at that time) and stoned to death.

Can you imagine the angst this young pregnant girl went through as news of her pregnancy spread through her small town. Even her espoused husband Joseph was going to divorce her, albeit “quietly” until he was visited by Gabriel in a dream and told that Mary’s child was the Son of God, Matthew 1:20. 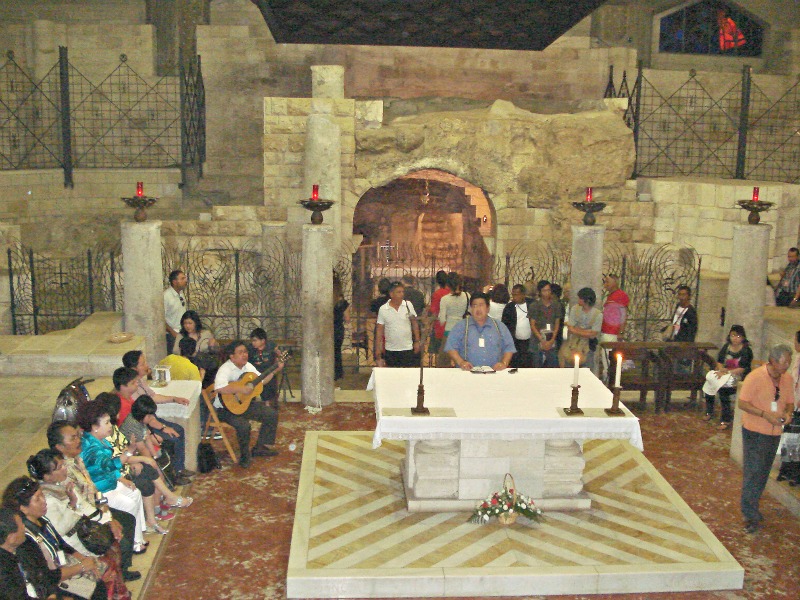 Worshippers in front of Mary’s home. Can you see the stairs and the dark ceiling from indoor cooking fires?

The bible tells that Mary and Joseph did have the wedding ceremony. By marrying the pregnant Mary this implicated Joseph in the eyes of the community as a fornicator also! Today being pregnant out of wedlock is considered commonplace, but not in the time of Mary and Joseph. It was more than a huge disgrace! This must have been both a miraculous time for the young couple as well as a time of being shamed by the community around them.

The scripture tells us that Mary went to live with Joseph as his wife, but had no intimate relations until Jesus was born. They did, after Jesus’ birth, have other children according to the bible. It is a tradition in some churches that Mary remained chaste. However, that is not the case. The bible clearly states that she had other children. The book of Matthew says that Mary and Joseph had four other sons James, Joseph, Simon and Judas (not THE Judas… Judas was a very popular name during that time), Matthew 13:55. 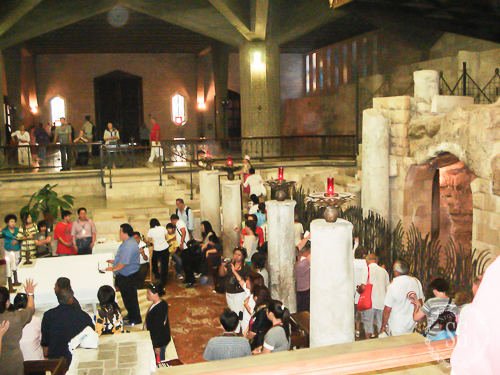 We see Mary’s motherly influence on Jesus throughout the gospels and her closeness to Jesus during his passion. On the cross Jesus showed great concern and love for His mother. He made sure she would be taken into the apostle John’s home and that John would treat her like his own mother!  John 19:26-27.

Mary was also one of the first people to see the empty tomb as we see in the book of Luke.

We have no record in the bible of Mary ascending in heaven as is tradition in some churches. This would be in direct opposition to biblical teachings. All people die. Dying is a sign of sin. Mary did not live a sinless life so she also died and then went straight into the presence of her Son and Lord.

This young first century girl, Jew, daughter, wife, mother, disciple, obedient servant, favored by God, blessed by God is a magnificent example of obedience, endurance, humbleness and love and devotion to God. She is a person to look up to and emulate! She is a beautiful example of a life sold out to God’s plan and how that can effect all of humanity!

As we celebrate this Christmas season, let’s thank God for Mary’s example of godliness, faith and sacrifice and ask Him to make us more like her Son!

Here is one of my very favorite Christmas songs… MARY DID YOU KNOW. Listen to the words. They are powerful and worth pondering! 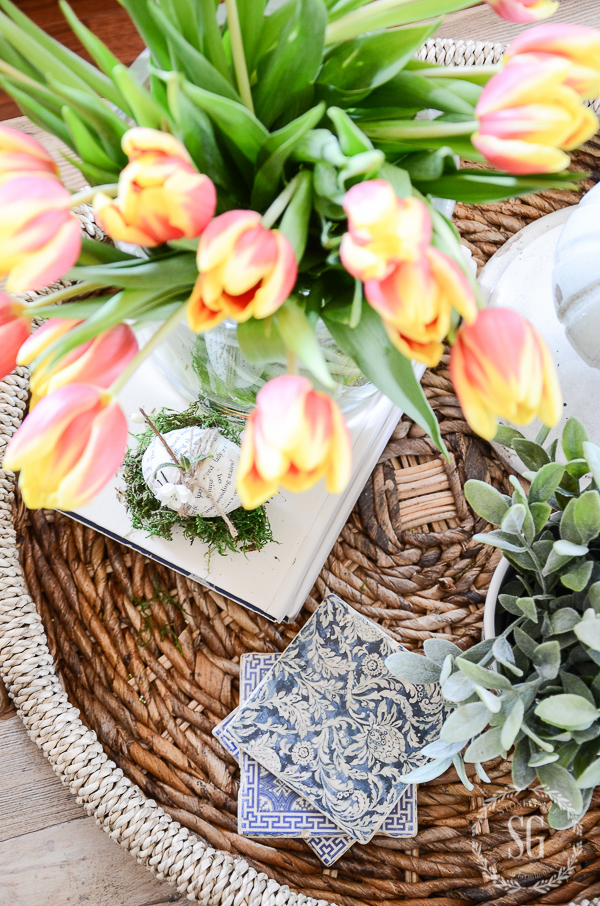 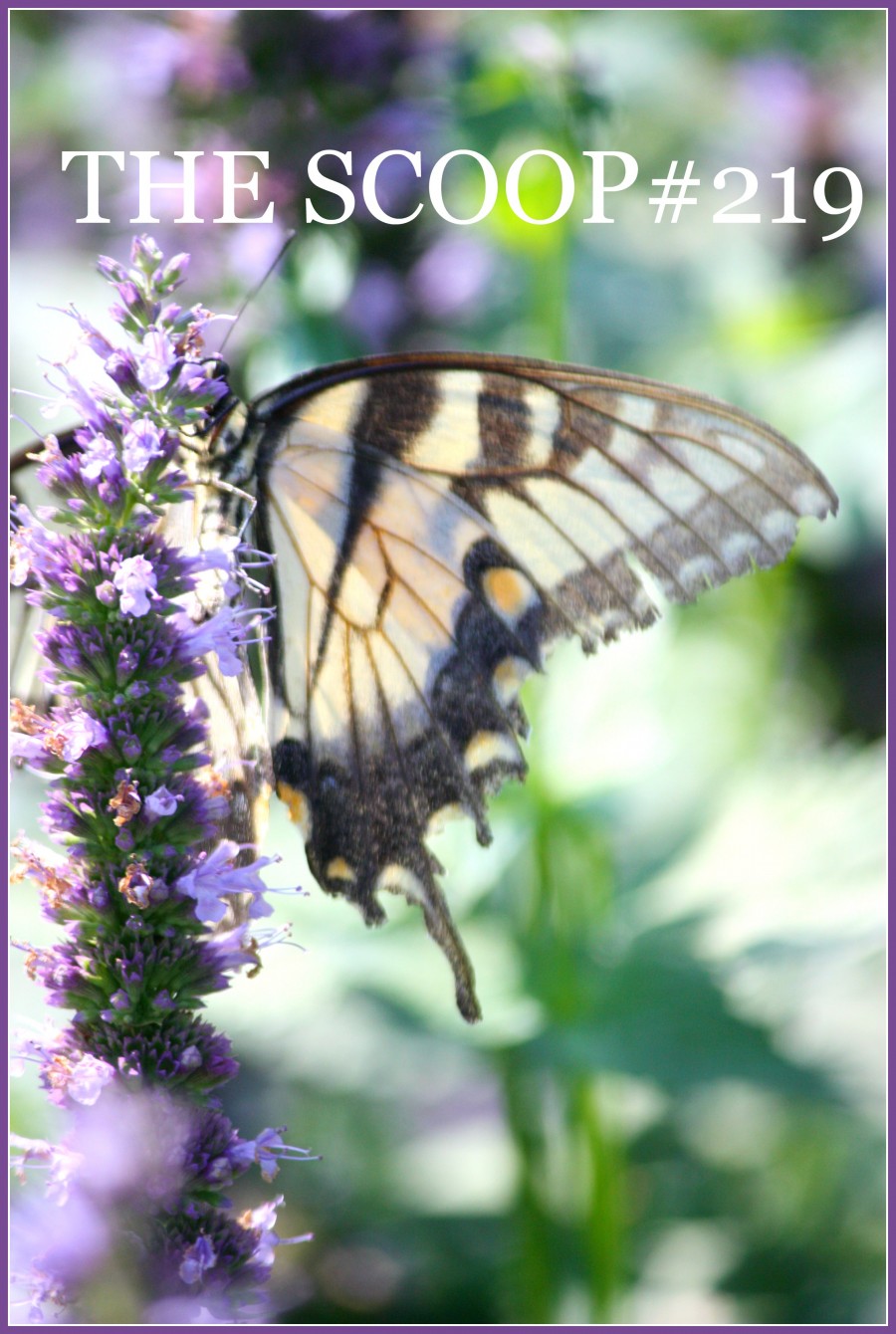 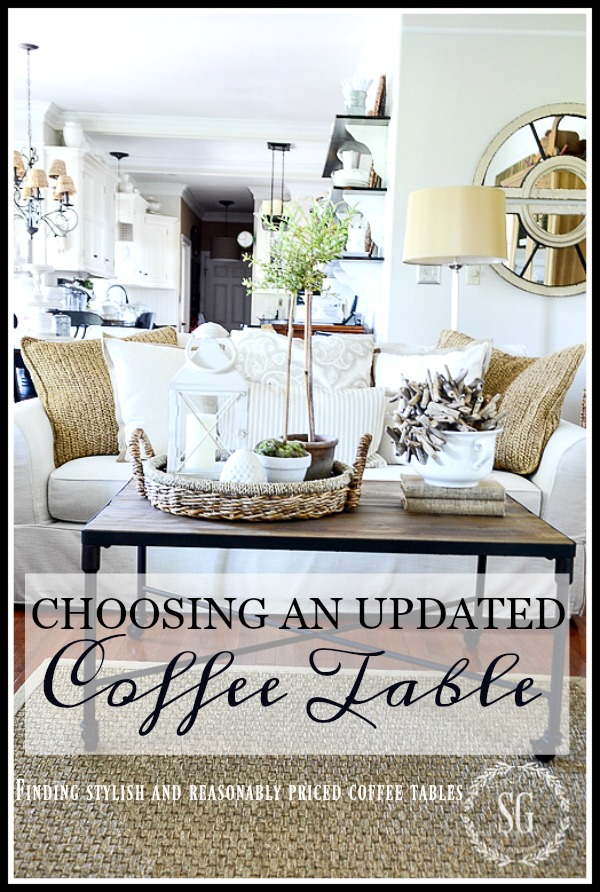 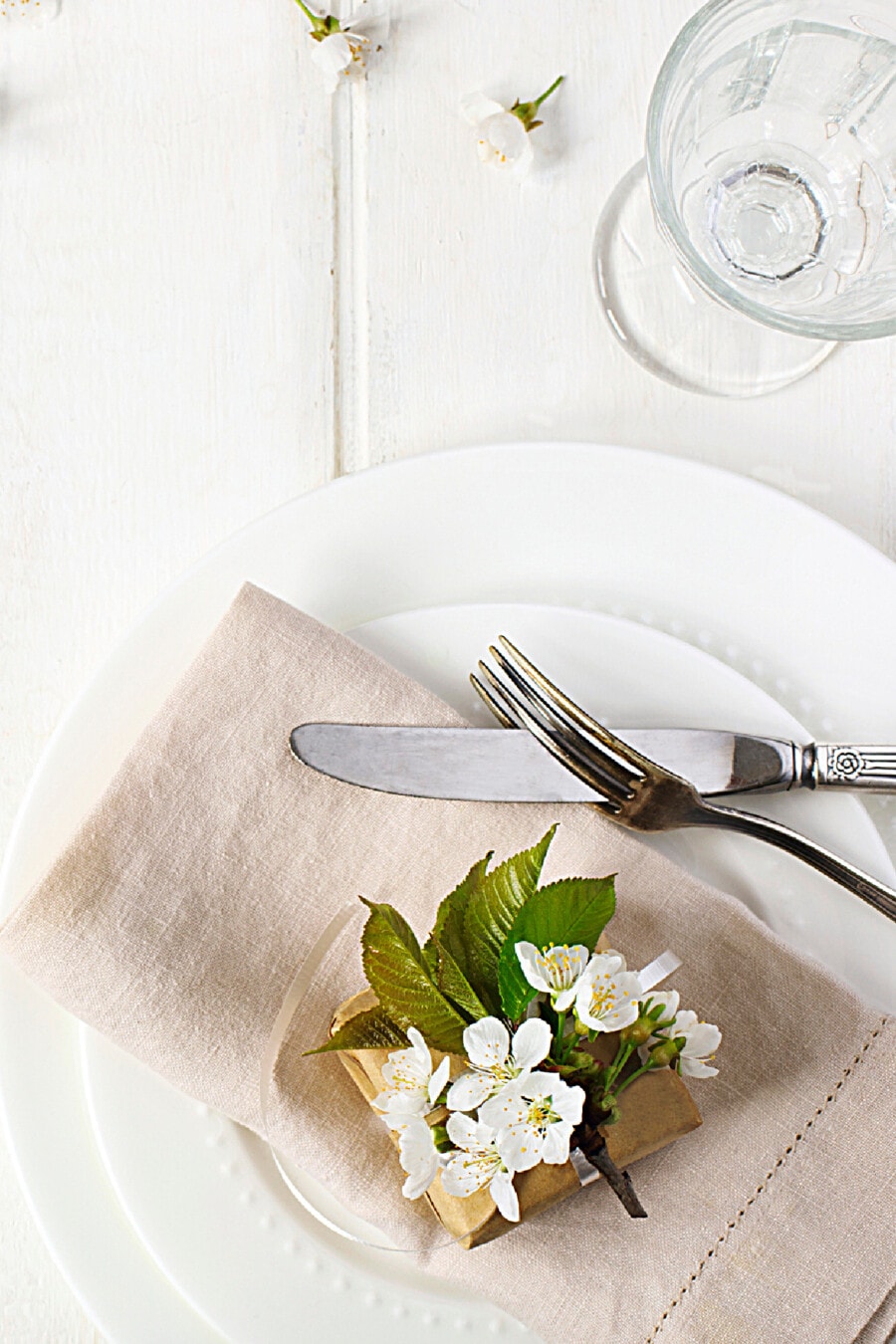 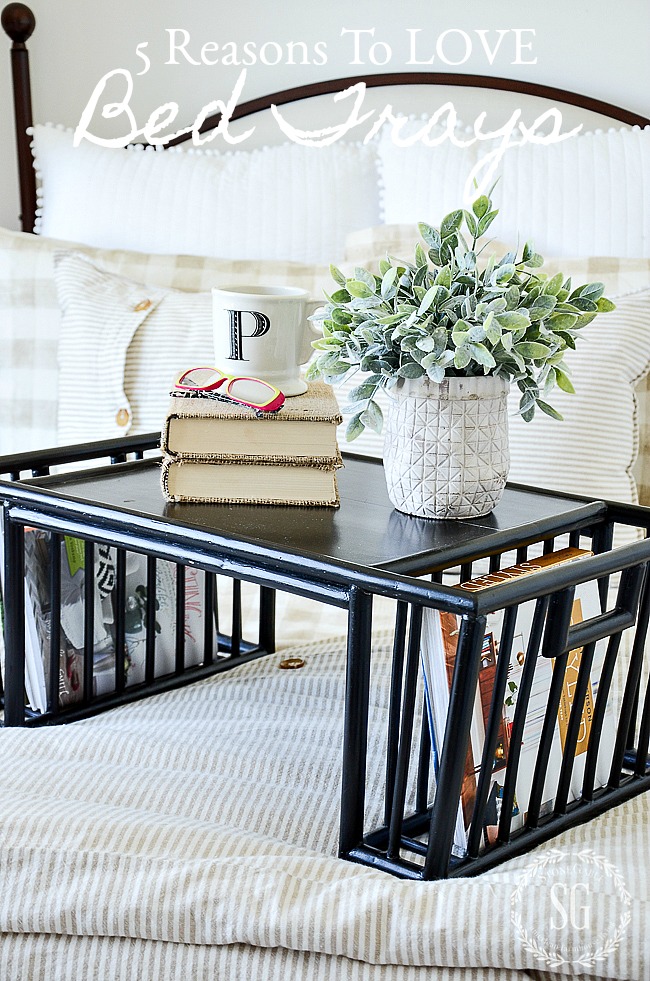 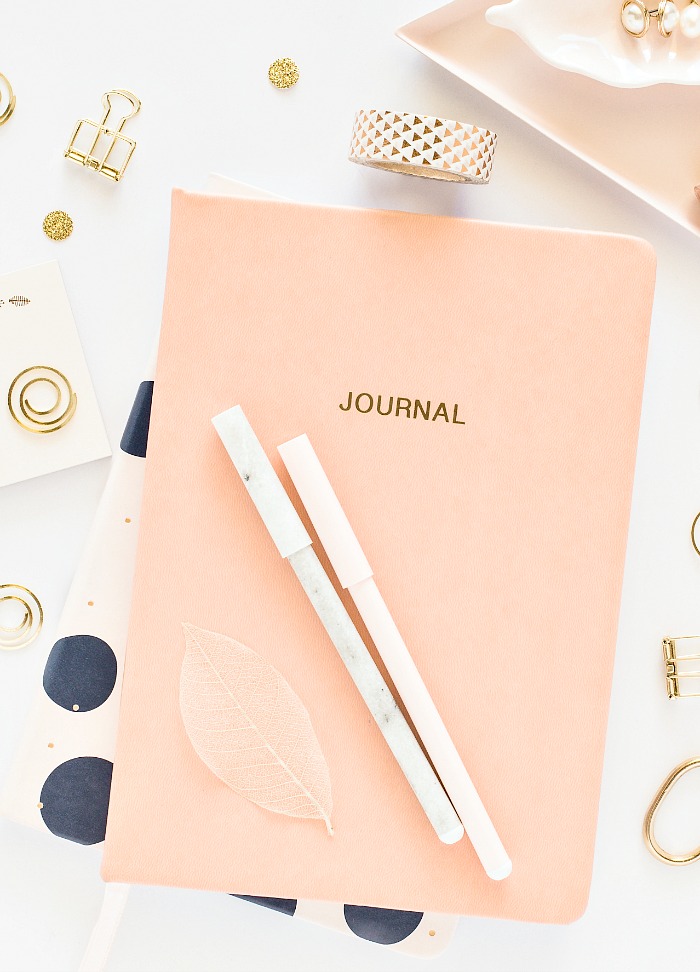