You are here: StoneGable / THIS IS THE LOVE OF THE BODY OF CHRIST 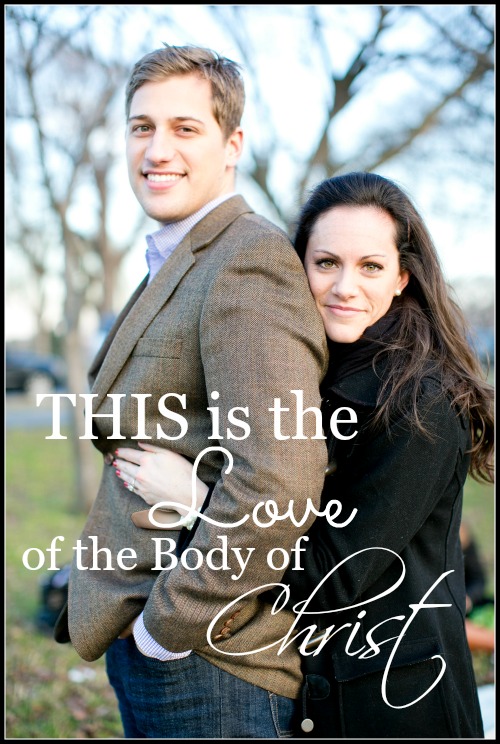 As we sat in the family waiting room at Jefferson Hospital in Philadelphia at 6:00 am I must admit I was a bundle of nerves. My son Christopher had been through this bloodbath of a procedure only 18 months before when he had been married only a couple months. Now he and his sweet young wife were facing another serious operation and a long long recover for him. But these operations were the only way to keep him out of a life that was wheelchair bound. Christopher was stronger this time, more prepared both physically and mentally. And he and Abby were more prepared as a couple. She had grown up so much in those two short years! Their “normal” was anything but normal for a young married young couple.

Bobby was the “steady Eddie” and rock he always has been but I was not doing well at all! I knew what my beautiful son had suffered last time and the huge chunk of life and the big dreams that had been stolen from this young man!  I knew his constant pain and weeks of being bed ridden and months of wheelchair sitting and crutching and a year of a cane and a painful limp. I knew the huge tole it took on him and how he fought and scratched himself back to good health, both physically and mentally. With his scars came a wisdom and a stronger will. A dependence on God and testimony to share!

In the wee hours of January 25 the four of us were in our hotel room praying together. Chris, Abby, Bobby and me. I could not close my eyes in prayer… they were riveted on my son! He was more quiet than usual, steeling himself for the journey beyond the hotel doors.

I kissed my son goodbye, told him that I loved him and held on to him a little longer than I usually do. I kissed Abby and told her to call us when she was on her way from Christopher’s bedside to the family waiting room. Bobby and I laid in the dark and I cried! I cried and prayed!

We could not sleep so we got dressed and took a cab the the hospital a block and a half away because it was still dark.  We beat Abby to the family waiting room by a solid hour. It was a solace to know that she was able to stay with Christopher until right before he went into surgery!

It was early in the morning and I knew that I had a long day ahead and no idea how I was going to get through it. I was worried and weepy and shaky.

I took out my computer and wrote a little note on facebook asking anyone and everyone who saw it to pray for my son. Pray that he would get through the operation and that his blood loss would not be as bad as the last time. Shades of the “last time” bore a pit in the bottom of my stomach!

At first a couple of dozen “likes” on facebook  and several prayers for Christopher and the rest of us trickled in. But, it was not long before the “likes” and comment and prayers started pouring in. By 10:30 am I had read over 300 prayers… real prayers for my son, Abby and for Bobby and me! I read every one! And I read them to Bobby and Abby too! Each prayer I prayed too. Facebook friends started “liking” the prayers of others.

WHERE THERE ARE TWO OR THREE GATHERED IN MY NAME I AM WITH THEM. Matthew 18:20

My spirit was so lifted. I honestly could feel the prayers of  the body of Christ. Yes, Jesus was right! I KNEW He was there with me. My nerves eased and my lifeline became that little facebook page.

By the afternoon there were over 1,000 prayers and comment and many more likes. I got scores of email and lots of texts from my friends and blogging buddies. All praying! All lifting my son up to the Great Physician asking the Lord for healing and strength and blessings and mercy and care and comfort and more!

That day I posted two other facebook posts letting this community of prayer warriors know when Christopher had gone to recovery and then a picture of him in his hospital bed giving a thumbs up! It was good to see him looking so well (even though he could not feel a thing from his midsection down). He looked so so much better than the last operation!

When all was said and done, over 3,000 friend, most of them I have never met, prayed for a young man they had never met. It did not matter. They were a galvanized army around us using the biggest and most powerful and best weapon of all time… PRAYER! This is the love of the body of Christ!

Christopher’s surgery went much better than any of us could have ever imagined. Yes, it was still very serious and the road before him is long, but the surgery was more than a success. Christopher, who had once walked and run on dislocated legs, had his pelvis cut apart and screwed back together… twice! They were able to transfuse Christopher by filtering his own lost blood back into his body and that make a HUGE difference!

Although right now he is still pretty much bedridden he is recovering remarkably! And is amazingly strong and funny and optimistically hopefully. And still clinging to Jesus!

His successful surgery was not a lucky thing! It IS  the power of prayer and the direct result of God taking our prayers so seriously! And those prayers came from loving hearts who went to the throne of grace carrying our needs… and our precious son… before THE Father!

Prayer is not to get our way. It is a powerful way to let God know that we need Him and are counting on Him and that we trust Him!

God in his benevolence and in His great mercy and in His heart that listens to His beloved used those prayers and reached down to heal a young man.

I am still so totally overwhelmed by the volunteer army of prayer warriors assembled that day. And how so many of you have chosen to dig  into the trenches and built a bulwark of prayers for Christopher… still praying for us! Please keep praying, don’t tire or forget.

I want God to have an amazing testimony of renown in this one single young man’s life. I want you to see how you loved us and protected us and lifted us up and the the huge difference your prayers made!

Christopher has a “not for public knowledge” desire of his heart that he has been waiting for for over 10 years. I would so covet your prayers in this area too! He has had so many surgeries and ups and downs for a 20-something young man! Join me in praying for God to honor his desire and Christopher to honor God!

Prayer is too often the last thing we do, when it should be the first. Satan know the power of prayer and will thwart of every way he can.

PRAYER IS THE LOVE OF THE BODY OF CHRIST!

Let’s join God’s legions and pray! Pray for everything and everyone! Never, never, never give up!

If you are reading this I am praying for YOU!

THE EFFECTIVE PRAYER OF A RIGHTEOUS MAN CAN ACCOMPLISH MUCH. James 5:16b

THE REAL CHRISTMAS STORY
The Ultimate Guide To Easy Container Gardening
THE NAMES OF GOD, PART 1
DOWNSIZING A HOME, OUR STORY