You are here: SUNDAY SCRIPTURE / SEARCHING FOR THE EMPTY TOMB! 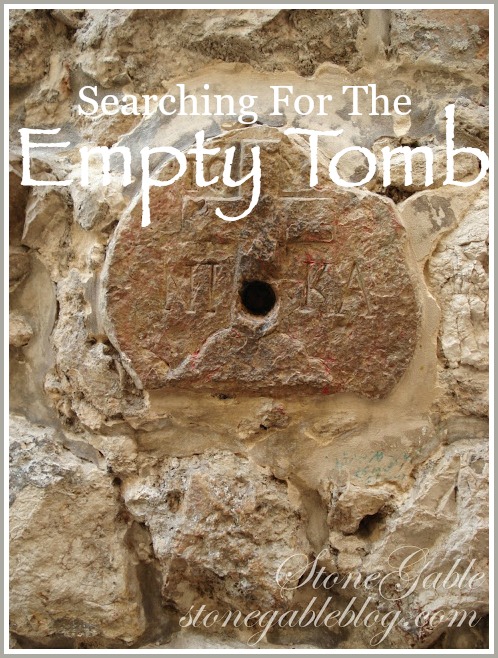 I will never forget the first time I saw the TOMB.
It was an oppressively hot and rather muggy evening… in early July. I was studying in Old City Jerusalem.
There were four of us… American women dressed in “holy garb”… head covered, shoulders covered, knees covered. Our head scarves wet with perspiration stuck to the sides of our cheeks and rivulets of sweat ran down our backs…partly because it was stifling and partly because we were overcome with heart racing anticipation of where we were headed.
We darted through the very crowded and close Arab market that was alive with strange faces and unusual aromas and brightly colored wares hung on each side of the narrow streets two stories high. The streets were so narrow that we could hardly walk four across… 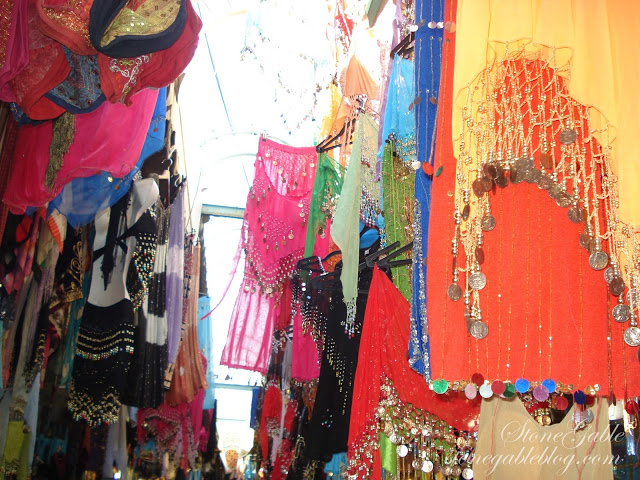 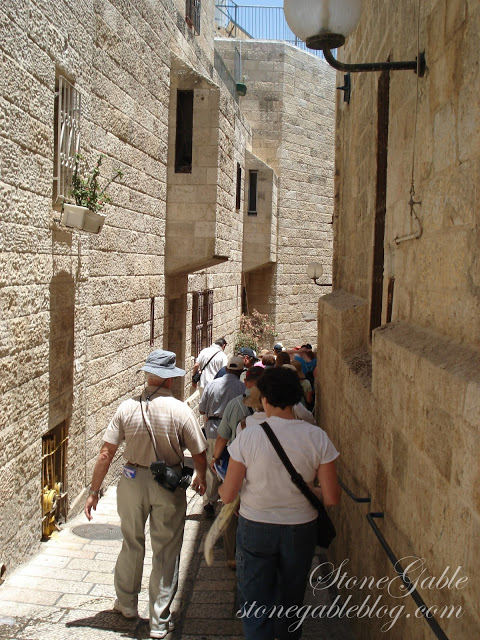 We had ventured out away from the rest of the students to visit and the Church Of The Holy Sepulchre …the holy burial chamber of Jesus of Nazareth. The four of us decided that we did not want to visit the tomb as a part of a study course… but as a pilgrimage.
And so it was.
We scurried along… huddled together, grasping at one another’s hands and clothing just to make sure we were not parted in the crowd. The streets were a labyrinth of alleyways and passages. The ancient stone buildings so tall on both sides it felt as thought you were in a tunnel! 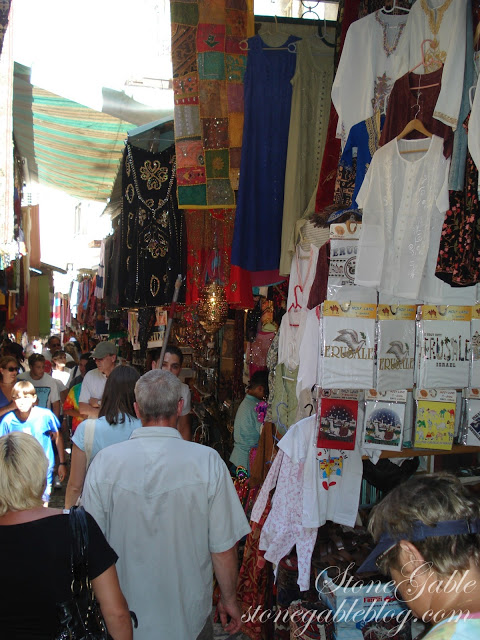 It wasn’t long until we were completely lost! Being lost in a foreign country can be scary and dangerous. And being lost in old city Jerusalem two days after a terrorist attack heightened my angst! Throughout my study trip the Jewish areas of Israel had been bombarded with hundreds of scud missiles and a terrorist had commandeered a backloader and plowed over crowds of Jews not far from where our group was that day!
We wound our way here and there trying to find a familiar looking landmark… the Tower of David, the gold top of the Dome of the Rock, the jewelry shop of David, the “safe” jeweler. But as much as we tried, nothing looked familiar. I began to second guess our decision to leave the safety of the group and go on this personal pilgrimage! What was I thinking?
At one point in an attempt to find our bearings we stopped at a corner of a ancient stone building. Standing in the middle of the street, I could stretch my arms out and almost touch the building on the other side.  I could feel the panic starting to rise up inside me… I don’t like the feeling of being closed in or lost in a sea of strangers and strange things! It mingled with the heat and made me feel lightheaded!
I put my hand against the wall in front of me to steady myself  and touched something etched into the building… a cross and the word NIKA. I knew that Greek word. It meant VICTORY. 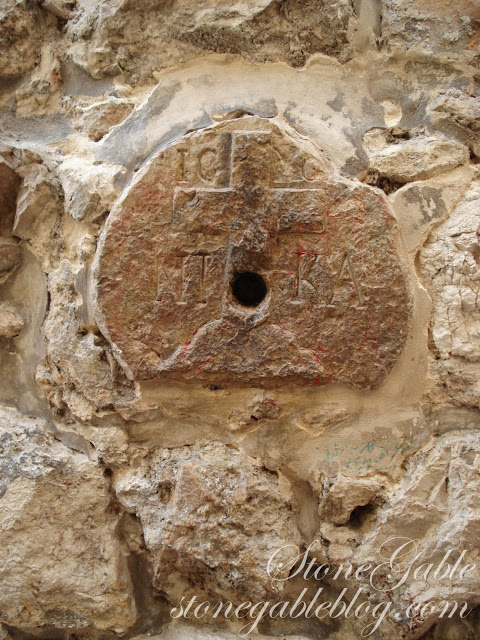 At that moment I knew exactly where I was although I had never been there before.  We had stumbled on to the VIA DELOROSA… the way of the cross. We were standing in front of the eighth station of the cross! We were unknowingly walking the path that our Savior walked over two thousand years earlier as he carried His instrument of death to Calvary!  Right there in the midst of the market… and the noise and the smells and the heat and the crowds of strange faces was the Way Of The Cross!
Because of my early religious background I was able to remember the eighth station on the Via Delorosa…

At this point I was totally overcome by the divine appointment that brought us to this exact place!
As Jesus walked to His death, a group of women met Him and were grief stricken. Jesus tells them not to weep for Him…but to weep for themselves and their children. As days would be coming that would be very hard for them. He felt great love and compassion for them even though He was steps away from His own death.
That evening, lost in old town Jerusalem while seeking the tomb where they had “laid our Lord”…we were these women! We were the woman of the eighth station on the Via Delarosa. Jesus met US at that corner and strengthened us and poured His great love over us!  And we were at peace! Our circumstance had not changed, but when the Lord steps into your world EVERYTHING changes! We went on our way praising God confident that we were not lost at all. We were just where God wanted us to be!
When we finally got to the Church of the Holy Sepulchre it was dark.. and the church not overly crowded.
How could I ever explain this “church”. Think of a fortress the size of a football field. Nothing to me resembled a church… or Calvary or a garden tomb… which are all in such close proximity housed inside the “church”.
The church was lit by hundreds and hundreds of ornate oil lanterns in different jewel toned colors and shapes hanging from above… and the whole huge place smelled like burning oil and incense! There was nothing western or familiar about this place. It was old and oriental and orthodox!
We made our way to an area in the huge complex-of-a-church that was the tomb where Jesus was buried.
Of course it looked nothing like a garden and nothing like a tomb. It was a small church… inside the big fortress church. A church inside a church! 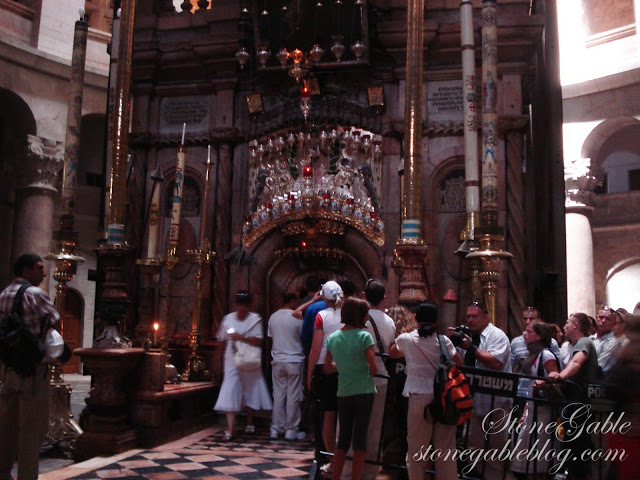 I decided to sit on a bench near the opening of the church-tomb to reflect and get myself in a worshipful place.  My sister-in-law sat with me.
I spent a lot of time weeping quietly… the magnitude of it all…Jesus’ supreme sacrifice for me and the extreme and lavish gift of life everlasting at my God’s expense pierced my heart!
Just before the Church closed for the night, four American women in holy garb… head covered, shoulders covered, knees covered… got in line to go into the tomb.
There are just some things about the tomb visitation I still want to keep locked in my heart… things that I ponder and treasure. Things I don’t want to share because if I do I’m afraid they will slip out of my mouth and float away into thin air and I won’t get them back inside me again!
Things between me and God!
But this you must know…
I was in the inner tomb… inside where you could see that it was actually a cave. Where they laid the dead body of Jesus of Nazareth.  It was a small cramped space. Only a couple of people could fit in at a time. I could not stand upright. It was a real tomb.
I knelt down at the stone slab where my Lord’s body once was.  I draped my arms over it and laid my cheek against it and the thirsty stone drank up my tears!

Again, I thought of a few women over two thousand years ago who came to this very tomb looking for Jesus

… they found it empty too!

HE IS RISEN”.
He is risen, indeed!

I have seen the empty tomb with my own eyes!

I AM THE WAY, THE TRUTH, AND THE LIFE. NO ONE CAN COME TO THE FATHER EXCEPT THROUGH ME. John 14:6