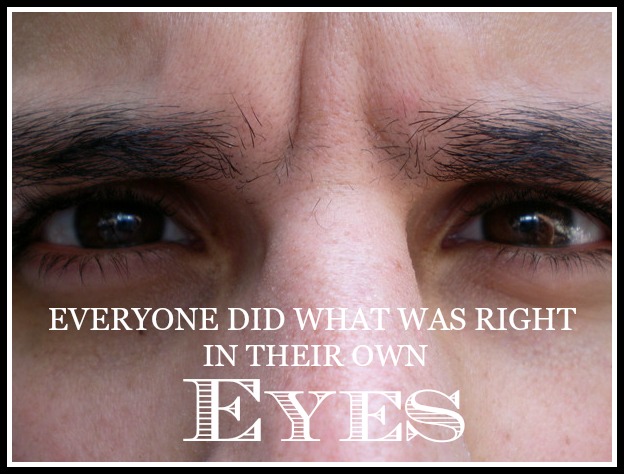 Right now I’m doing a study on the book of Judges. Yes, Judges! That Old Testament book that is sandwiched in between the books of  Joshua and Ruth. I would guess that Judges is not one of the top 10 favorite book in the bible.  I love the Old Testament as much as I love the New. It’s important for all of us who call Jesus our Lord and Savior to know the full council of the word of God… and that includes Judges!

The book of Judges is about a very very dark time in the history of Israel.

A time when the Israelites

“did not know the Lord nor yet the works which He had done for Israel”.

Judges is a book about APATHY AND APOSTASY! About a time when the chosen people of God turn away from Him and did what was right in their own eyes.

From the time the people of Israel knew and followed God until the apostasy, or falling away of their faith, took a mere couple of generations! WOW!  After Joshua, a great and mighty servant of the Lord, died and his generation along with him the next generation did not know God. Oh, they knew of God… but did not know Him and His word. They were no longer obedient to Him and did not cling to His ways!

The book of Judges is VERY convicting to me!!! It is a lesson in what happens to an individual and a nation as they stray from being committed to knowing and following the Lord. When God is no longer important and the very center of their lives. It teaches us about what happens when we start doing what WE think is best and not what GOD knows is best! The downward spiral and unravelling of a person and a society is jaw-dropping!

The book of Judges is very, extremely, overwhelmingly relevant for not only us but for our nation today!

To understand Judges, we need to get a little insight on the relationship between God and the nation Israel.

God chose the people of Israel to be a light in a dark world. To shine so that as they lived and obeyed the Lord they would show just who God was to a world that was mired in idolatry and spiritual darkness! The Israelites were to be the way the whole world would come know God and worship Him! God promised to bless them so greatly, IF THEY OBEYED HIM,  that all the world would wonder who the great and benevolent God of the Jews was. In ancient times everyone believed in a god.  (Deut. 30)

But God also promised the people of Israel that if they would turn away from Him and not obey Him and would be a bad representation of who He was to the world that He would punish them. (Deut. 30) Not because He was mean or spiteful… but because of God’s righteous judgement. The people of Israel had made a covenant, better than a promise, and agreed to this deal. Every evil act has a consequence.

During the time of Judges the stubborn nation of Israel started a very dangerous and downward spiral! They would turn away from God and…

…Then God would punish them for their disobedience and disregard for being God’s representative in the world.

…Then the people would cry out to the Lord when things got really bad for them. I find is so interesting that not until the things bad in their lives that they concerned themselves with God. Sound like many of us today!

…Then God would answer them and send them a leader called a Judge to set them on the right path of obedience to God and get them out of the trouble they were in.

…Then there would be peace and rest in the land until the Judge died.

And why did the nation of Israel sink into this downward spiral of disobedience and judgement?  It was a matter of THEIR EYES!

The Hebrew language is very literal. It use lots of concrete words to define abstract ideas. The word “eye” in the context of Judges means “sight or perspective or arrogance”. During the time of Judges the people did what they THOUGHT was right… not what WAS right.

EVERYONE DID WHAT WAS RIGHT IN HIS OWN EYES. Judges 21:25

The book of Judges can be a very “eye opening” book! It shows us what happens to us when we forget God and go our own way… and it isn’t pretty! It shows us how we too can get caught in recreating the same sin over and over again because it is our very nature.

Thankfully, God has a cure for our eyes!!!!

FIXING OUR EYES ON JESUS THE FOUNDER AND PERFECTER OF OUR FAITH, WHO FOR THE JOY THAT WAS SET BEFORE HIM ENDURED THE CROSS, DESPISING THE SHAME AND IS SEATED AT THE RIGHT HAND OF GOD. Hebrews 12:2

Fixing, or looking at nothing else than Jesus, is a way to stop the cycle of our own eye problem! And how do we do this? By bowing our knees to the authority and kingship of Jesus in our lives. Living for Him and not for ourselves! Accepting His free gift of salvation and becoming a disciple of His and His alone!

Then under the guidance of the Holy Spirit, reading and studying and obeying the very Word of God! How can you know and see Jesus if you do not read and study your bible?

Let’s not take our eyes off of Jesus! For if we do we will develop the same eye problem the nation of Israel had in the time of the Judges!

Thank you God for the Jesus!!!!